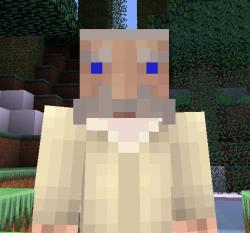 EZWoodworker hasn't added any friends yet.

Is Ventrilo used by anyone?

As a relative newbie I was wondering if anyone ever uses Ventrilo?

I see this all the time on SG.  Main map and wilds.  Traveling, breaking a block, opening a chest, chopping wood, etc. causes all or part of the area to not be rendered (all I see are block frames when a block is highlighted.  It is a great cheat to see what is under ground, but makes for lousy video and makes it difficult when you can't see where you are going.  I usually play between 10am and 1pm GMT and there are from 0-3 others logged in.  I don't have this issue SP nor one the one other server I play on sometimes (it is also 1.7.2 vanilla).  Anyone else have this issue?  Is it common?  Any suggestions as to what to try?  My ping is good and I did a visual rout check and it also looks fine.  Here is a short sample of what is happening.

Has anybody else seen the April fools snapshot (15w14a)?  You can't get to your existing saves, and the world created has at least a few strange things: Squid "swimming" above water; Water bubbles are hearts.  I haven't checked out much else yet.  Back to the game...

I am 67 years old and had a career in IT. Until retirement, I didn't game at all. I have been playing MC for 3-4 years now, mostly single player. My grandchildren got me interested in MC and my interest grew from there. I have only played on two servers. I first played on my daughter's private server, where I played with the grandchildren and children. During a birthday party on the server for my grandson, a friend of his gave me my first and only experience with griefing and uninvited PVP, which turned me off playing on servers.

When my daughter nearly ceased playing on her server, I began to miss playing with others, so after a while I tried a new server (don't remember the name) that touted being for mature players and that would not tolerate griefing, etc. Well, it was fun while it lasted, even though, I never was able to interact with anyone else. The server then disappeared after a month or so.

I follow a number of the MindCrack members' LP videos, which has me wanting to try playing with others again. A Google search led me to a number of mature player servers, of which SixtyGig seem to fit me best.

I am a life long woodworker, so my IGN is EZwoodworker. The EZ comes from a woodworking tool company I was doing some online work for at the time I got into MC.

Although I do not usually make MC videos, I have a number of live and animation videos that I have done related to woodworking. Here is the only MC video I have at present, it is of a rail line that I constructed on my daughters server (http://youtu.be/0RWyaWzBPoA). Somewhere I have some clips of a roller coaster I also built there, but cannot find them at the moment.

I hope that you will look favorably upon this application.